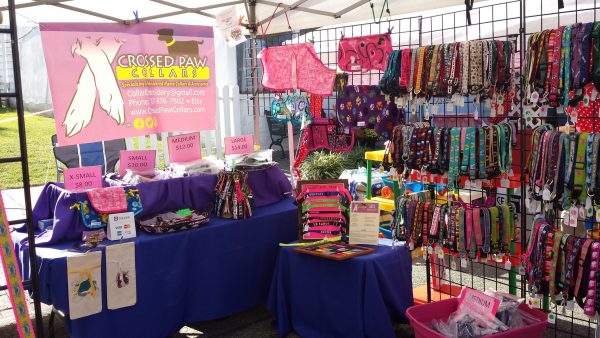 One of my favorite and most heartfelt is the one about a young boy about 10yrs old or so. We were at a festival with a few carnival rides for the children.  He was looking at a collar for his dog. His friend said to him “If you buy that collar you won’t have enough money for the rides” without hesitation the young boy said “I will have my dog way longer than any of those rides” and off they went. My heart melted at hearing how much a young man cared for his dog.  A little while later he came back to look at the same dog collar. I spoke with him about his dog. His eyes lit up when he talked about him.  I already knew from the first encounter what I was going to do. I gave the boy the dog collar and asked him to promise to always take care of his dog.  Tears filled his eyes as he thanked me and gave me a hug.  Later that day his parents came by and thanked me. I told them they had a great son and was happy to make him happy.

Remembering this story still brings joy to my heart knowing how much this young boy loved his dog.

As we were packing up after a long and very unprofitable event, a little girl comes up to me and asks if we have any collars for $5. (I am thinking no we don’t’ and we have taken a huge loss already). I ask her what kind of dog she has and I show her to the collars that would fit, tell her to choose one and bring it to me and not to worry about the price. It’s about the kids and their dogs, not the money.

Another time we were participating in a fundraiser for a local humane society. My husband had been talking with a lady who was trying to find a new collar for her dog. She told him the dog has had the same collar for several years and was badly in need of a new one. While they were talking she mentioned she had just lost her job of 15yrs and was looking for another. My husband tried several times to give her the collar but she refused to just take it, so he compromised on a few dollars.  At Crossed Paw Collars we want to take care of the dogs.

We have been at several markets/venues when we have seen a senior dog with their owner. You know the ones that are having a bit of a hard time but still going on outings. We always ask about the dog and how long they have been together.

One man said he rescued him as a pup from the same market where we were. He said” you see it’s a good place for people to dump unwanted dogs because there are so many people her and hopefully someone will take them home”. As sad as this sounds I have seen it happen. His dog was now 14yrs old and full of arthritis but he was very content. We told him to choose a collar at no charge for his dog. Why? He asked.  Because even the senior dogs need something new.

At another city venue a couple walked by with a leash that had seen better days. She didn’t even stop to look at our products.  I took a leash off the shelf, found her in the crowd and gave her the new leash.  The last thing we want is for a leash to break and the dog to get hurt or even worse on city streets.

We were at an outdoor fundraiser when it started snowing. No one expected snow that day. Fun Times! One of the neighbor vendors had a “therapy” dog, not a true therapy dog but one that helped keep the lady calm. They had brought blankets for the dog to lay on however the dog wanted/needed to be closer to the lady. We noticed the very large dog was shivering in the cold wind so we gave him one of our coats, aka doggie drying sheets.

Actually we have been at several markets/events through the years when we have seen thin coated dogs shivering in the cold or wind. We have never hesitated to give them a warm coat.

I have lost count of the numerous times my husband and I are at an event and see the senior dogs come by our booth. It’s a look between us after years of marriage, knowing, acknowledging the right thing to do. We let the people choose the collar they want for their dog. When it’s time to pay we will take the price tag off the collar and say “it’s yours, we like to take care of the senior dogs”.

You see –  we feel the senior dogs have given us their whole life, maybe not the same person.      But here they are with a family who loves them and there they stand giving their human their unconditional love. Of course they deserve something new

As a couple that has had several senior dogs and senior dog friends we understand the trials a family goes through. The young rambunctious dog to the one that is always at the vet and each morning has that awful question lingering.

Scrolling through Facebook I saw a shelter volunteer post pictures of the collars she brought home to wash. Sadly, they were very tattered and torn.  A few days later we shipped a large box of collars for the shelter dogs. The shelter volunteers and dogs were extremely surprised and pleased and Thanked us profusely.

We’re not in this for the Thank You’s but it sure is nice to hear. And we continue to send this shelter new collars a few times a year.

We have also donated to numerous dogs, cats and horses that were in need of life saving surgeries.

This is all in addition to the numerous amounts of collars, leashes and cash we donate, for fundraisers or charity events we can’t attend. Both locally and across the United States.

We have donated Pet Oxygen Masks.

We are trying to ensure they are on every EMS vehicle starting at home and spreading across the country. (With your support of Crossed Paw Collars we will continue to donate pet oxygen masks.)

EVERY LIFE IS WORTH SAVING

This site uses Akismet to reduce spam. Learn how your comment data is processed.